The effect of social media addiction on children - Mini Beee

Your cart is currently empty

Children’s use of social media is an entirely new concept. Don't bubble wrap your child to shield it from social media. But get to grips with social media, quickly. We need to understand the influence that it has on our childrens lives.

As parents, we can all feel a little anxious about today’s digital world, and the impact that it is having on our children.

The rise of social media is something that is totally alien to us and our own childhood (where the internet was only just being invented, and we had never hashtagged anything in our lives).

Whether it’s through YouTube videos, on the internet, through film and TV or via their own accounts, our children will be exposed to social media - that’s an almost unavoidable fact. There’s nothing we can do to stop them being aware of this.

So, we parents have to get to grips with social media, quickly. We need to understand the influence that it has, the responses that it can encourage (both good and bad), and, most importantly, realise the full scope of its dangers.

Children’s use of social media is an entirely new concept and so, it’s bound to be frightening. That doesn’t just go for us as parents - who can be nervous about almost anything our child is exposed to - but for international organisations and governments, too.

The effect of social media addiction on children has been the topic of numerous recent studies, as experts attempt to find out what this unprecedented rise in digital-oriented behaviours may have on the next generation.

So, as this is a topic that we are personally passionate about, we wanted to use this blog post to outline the findings of the latest studies. We will be detailing the findings, explaining what they mean, and providing you with actionable tips to mitigate this risk.

The latest studies into social media addiction in children

Today’s digital age is a fast-paced, ever-evolving world, where content is shared at a faster pace than we’ve ever seen before.

In some ways, this is fantastic. We are learning new things all the time, and the ability to discover information is at our fingertips, whenever we want to use it.

However, naturally, there are some significant downsides to social media, especially for younger people.

As you can see from the graph below (Source: Our World In Data), social media usage has witnessed a dramatic rise in just the last 15 years alone. 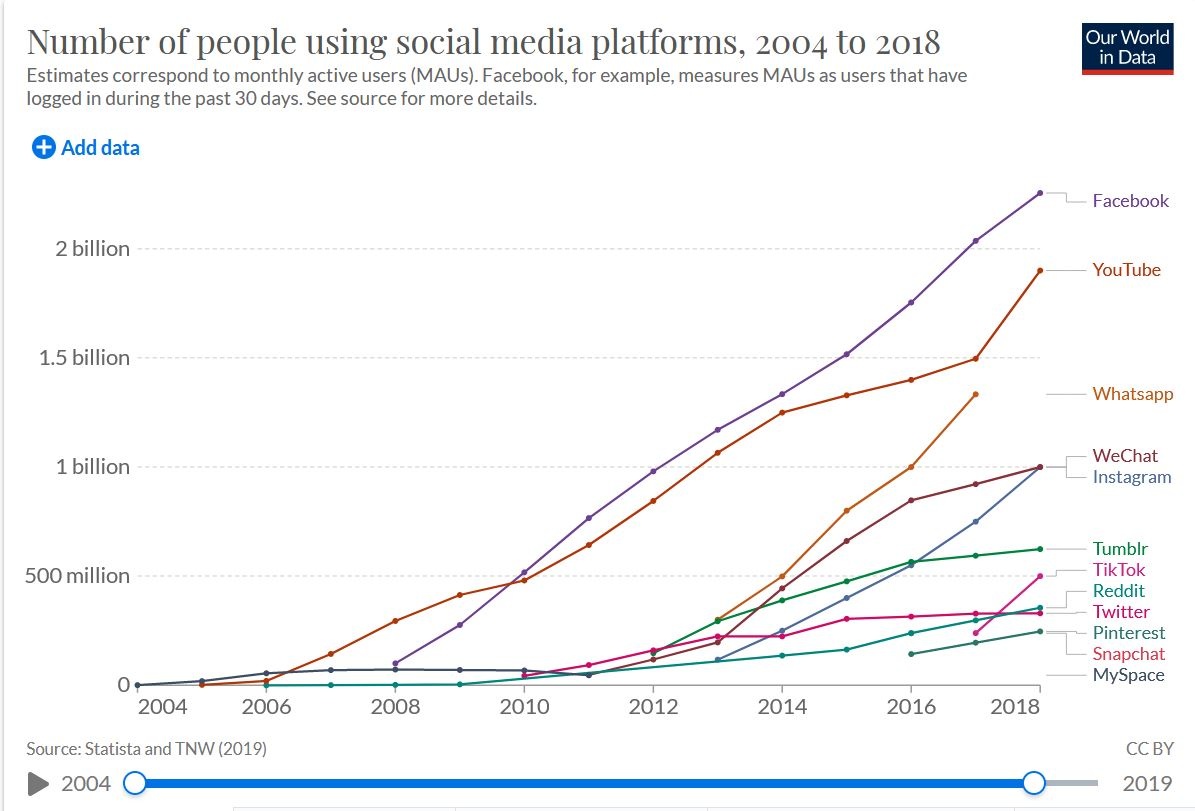 What these sources also tell us is that age has a significant influence on these usage trends. Across the board, younger people use social media far more than older generations. The proportion of younger users of Snapchat and Instagram is also proportionally far higher. In fact, 73% of people under 25 are using Snapchat.

Currently, 87% of children aged 12-15 have at least one social media account. Furthermore, 81% of online 9-17 year olds have visited a social media site within the last 3 months.

However, despite this overwhelming majority, studies show that parents are still very much in the dark about social media. Just 10% of parents with a child under 10 have openly discussed the right way to behave online and how to deal with online threats.

The addiction of social media is frighteningly common amongst children.

In the last decade, depression and internalizing symptoms amongst young people has increased signficantly. Unsurprisingly, many experts are linking this to the increased usage of social media.

As you can see, it’s a rapidly growing trend, and parents are right to be concerned.

Social media can have a serious impact on children’s psychology, behaviour, self-perception and their mental health across the board.

The ways that social media addiction can affect children include:

The importance of parental supervision

We understand that this can all sound incredibly scary.

But firstly, it’s crucial that you remember that social media usage does not necessarily mean social media addiction.

Addiction is when usage becomes out of the individual’s control, when they are unable to stop themselves on their own. These side-effects can occur in anyone who uses social media regularly, but they are far less likely to develop if you closely monitor your child’s social media usage.

So, you do not need to stop your child from ever using social media, you just need to help them use it in a safe and governed way, which is appropriate for their age. This is the best way to reduce the likelihood of social media addiction and the side-effects listed above from occurring.

To help you to ensure your child uses social media in a safe way, we would recommend that you take the following steps:

And remember, instead of trying to bubble wrap your child by pretending social media doesn’t exist, the best thing that you can do is to educate yourself and them, and to govern the way that they use it.